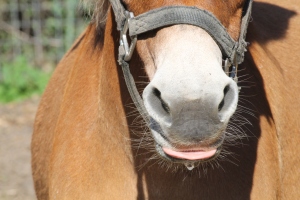 Rudy is a smallish, copper-coated mule who lives at the barn where I board my Buzzy (horse). But Rudy isn’t just any mule. Until two years ago, Rudy quivered in fear at the thought of a human coming anywhere near him. The story goes that he was once owned by Amish and that something went very wrong. I can only imagine. I decided to make him my personal project.

It’s been a slow-boat-with-no-wind with Rudy, and after two years of coaxing and patience, he will now come to the gait when I appear. In fact, he runs, braying all the way, knowing he will get a treat. And he does – get a treat.

Many years ago I discovered that horses go berserk over Ginger Snaps. (So do I for that matter.) And Rudy really goes berserk over them. He has become a veritable Ginger Snap monster, and though he still doesn’t deign to be touched, he will tolerate my brief strokes of his lip while the cookies pass from hand (mine) to mouth (his).

In conjunction with this, Rudy has adopted an interesting habit. After he’s had a few Ginger snaps, he pauses and seems to enter an altered state of consciousness where his tongue protrudes slightly and saliva dribbles from it. We have decided that he goes into a state of euphoria where he sucks away at the remaining flavor in his mouth left from the Ginger Snaps. He is at this point, satisfied, though certainly a willing participant if another cookie (or two, or three) is offered.

So alas, box of Ginger Snaps in hand, perhaps Rudy and I can progress to taking an in-hand romp through the fields – next year? I better get some stock in Nabisco.

2 thoughts on “Rudy and His Ginger Snaps”