I can’t believe we’ve had our bundle of joy for two weeks now and during this time, not only have I learned about our little wild thing, I’ve learned a thing or two about myself. Or 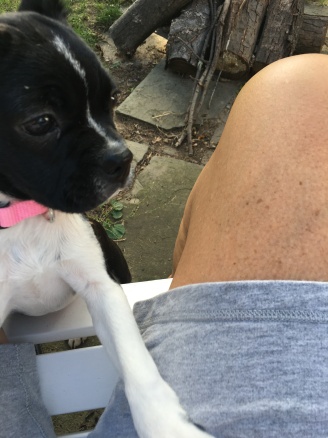 should I say, Rosie is hauling these things from somewhere in the deep, dark recesses of my being.

Typically, I spend crazy amounts of time in my office, on my computer, dealing with email, social media, and all that goes along with that, getting stressed to the max! Yet there I sit, accomplishing nothing, going down one link trail after another, getting obsessed about really stupid stuff like the Pitt-Jolie breakup. When you have a little one in the house, you cannot ignore her for hours at a time; in fact, you need to take her out every hour or so to teach her the ins and outs (hopefully all outs) of housebreaking.  Since Rosie, I am prioritizing (what a concept) and only doing what I really NEED to be doing, like writing this post.

This brings me to another discovery. Puppies do not “go” on command. In fact, in the beginning they don’t have a blessed clue why they are outside and what they are supposed to do there.  Armed with a pocketful of treats, at first I anxiously followed Rosie around so I could give her an instantaneous reward when she peed or pooped and get back to my key-banging. This didn’t go as planned. Instead, I became a big distraction leaving potty time the farthest thing from her mind.  I mentally threw my hands and began to enjoy just being out there with her while she sniffed around incessantly, went mad-crazy over bugs, ran around in gleeful circles, and plopped herself down in the sun with a stick to gnaw on. And all the while I watched, I had on a great, big happy face!  Rosie was making me be in the moment!

Finally, also thanks to Rosie, I am entering another phase of life: second (maybe third?) childhood. I have always been an active sort, but truthfully, as the years have gone by, I’m not as intensely active as I once was. That has now changed. I am walking dogs, bending to pick up poops (mostly outside – yay!) and food bowls, standing, picking up toys, throwing balls, and more until I drop into bed at night more exhausted and fulfilled than I have been in years.

All of this thanks to a mad-crazy, funny, delightful Boston Terrier puppy named Rosie.

The adventures of a very cute Boston Terrier puppy and her exhausted, but happy owners. 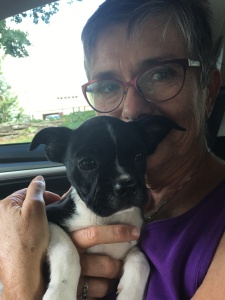 Much to the negation of ‘we’ll never have another puppy again,” we drove 2 hours to just “see” the last of the litter of 5 Boston Terrier puppies – a little female with a not-so-smooshed-in” face and a wiggling butt and tail that sealed the deal at first glance. Home we drove with this squiggling little mass of black and white in my lap who finally fell asleep when we were just 20 miles from home – a foreshadowing of what was to come.

Next – the introductions! Our 2 resident BT’s looked at the lump in my arms with this “What is THAT and why is it in MY house?” Our oldest is indeed a senior citizen at 11, but he is mellow and always fine with other dogs. My 9-year-old female? Ha – now that’s a different story. Her track record with other pups is less than stellar and she usually goes for the weak one, a fact of which I am not proud. But dogs will be dogs, and so???

It was late afternoon by the time we got home and the priority was to establish separate territories for the troops, namely keeping Sasha – the 9-year-old – behind the gates that wall off the kitchen. We left my old man in with Rosie and voila – let the party begin! Normally a dignified gent, Brinkley has risen to the challenge of our utterly relentless baby girl and become a puppy again in his own right. It is heartwarming. In the meantime, Sasha just sits, stares and throws me pathetic looks at which my heart breaks. Sasha – hang in there, we’ll work this all out.

Our first night was … interesting. Brave hearts or foolish souls, we invited little Rosie into our bed. All was well until the bell tolled at 4 a.m. and little teeth found their way to nice, soft, warm fingers and toes. Ouch! I promptly went to my computer and ordered 3 books on puppy training. After our 4 a.m. unwelcomed wakeup call, we walked around like zombies all the next day, albeit with smiles on our respective faces.

Laid back? Ha!! That’s the term the breeder used to describe our little wild cat who is constantly looking for the next thing with which she can get in trouble, who has learned how to jump the kitchen room divider when our two seniors have remained properly ensconced behind it for years, who marches around the back yard carrying a branch with leaves as if she is ushering in a parade, who was found happily munching on a cicada shell, and well – get the picture? And would you believe, at this moment, as I write, she is curled up in my lap, fast asleep, making me out to be a great big liar!!

P.S. – Sasha actually played with Rosie for 2 minutes one day. Things are improving.