As is usual on Saturday mornings, this past Saturday I went out to the barn to groom my trusted steed, Buzzy, and gab it up with my dear barn friends. It is a ‘girls-only’ time and a place filled with my favorite sights – horses – and smells – horse poop and hay. 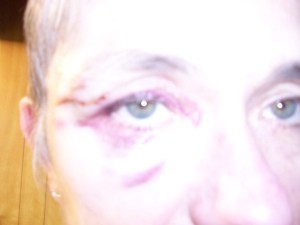 I went about my usual routine of feeding Buzzy his grain, and moseying out to feed my favorite mule and his mini-horse harem their Ginger Snaps while Buzzy munched away. I have never found a horse who doesn’t scarf those cookies right down. It is comical how these small hooved creatures gather around me like kindergartners clamoring to be teacher’s helper for the day. And the mule goes into this euphoric state where he continues to relish the cookies’ taste by sucking on his tongue, with its pink tip protruding slightly.

Back to Buzzy: grain gone, time for a good grooming. It’s shedding time and a grooming session now means losing half a horse with all the hair that comes off. Buzzy was restless, wanting to go out and chow down on phase 2 of his morning meal: hay. I struggled to contain his exuberance and managed to finish.

Next, I spent a few moments chatting, and then, to placate my pawing horse, I decided to take him for a little stroll in hand down the lane. I unhooked him from the cross ties, and was about to connect the lead line when I truly don’t know what happened next. Something smashed into my face – his head? His leg? He was out of control, whirling, and I was catapulted across the barn where I unceremoniously landed on my ass. (Lots of cushioning there – good thing). My glasses were gone and I felt a warm, sticky liquid flowing from near my eye.

As for Buzzy, he was whirling around, wild-eyed and with the help of Linda, managed to get into a stall where he pranced and snorted.  My friends noticed that the skin above Buzz’s eye was red and puffy.  As for me, I had two cuts around my eye, one kind of deep, and I felt like I’d been hit in the head by a bus. Other miscellaneous bruises, no major damage.

Here’s what we’ve pieced together. Somehow Buzzy caught part of his eyelid on the cross-tie clasp and it cut him which threw him into desperado mode and I just happened to be in his way.

This was a good reminder of something about which experienced horse folks can become cavalier, and that is that you just never know when you’re around horses. Anything can happen at any time. Buzzy is a steady, calm horse who is not prone to major spooking or bolting. I am blessed. But over the years, we have had a few bizarre things like this happen that serve as a reminder. Yesterday’s episode could have been worse – a lot worse. Buzzy could have stepped on me, though my friends told me it was clear he was trying very hard not to. The head injury could have been serious, my eye could have been cut, and so on.

As it is, I am left with one very visible trophy of my barn episode: one very un-glamorous and obvious black eye!!

Devotionals on Writings Received from the Celestial: A COURSE IN MIRACLES, A COURSE OF LOVE, THE WAY OF MASTERY, CHOOSE ONLY LOVE, and THE WAY OF THE MARYS . . .with Celia Hales