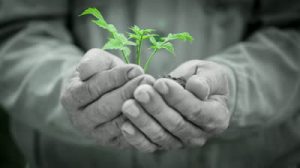 I am an outdoor junkie, even if it means going for a bicycle ride or jog around my very-suburban neighborhood. Being the creature of habit that I am, I stick to three or four tried and true routes and I take comfort in watching the ebb and flow of people who live in the houses I pass. I have done this for all my adult life. I have been in my current neighborhood for 10 years and one of my routes takes me past the fields under the major power grid coming into our city. These fields are long and empty except where an old man has planted a perfectly plotted and aligned ‘farm’ filled with corn, tomatoes, sunflowers,  pumpkins, zucchini, eggplant and so much more. Every time I pedaled or jogged past his farm, I’d see him, bent over – pulling weeds, or planting something new, or just plain playing in the dirt. He was shy, or maybe anti-social, but I wondered how someone who could create such mastery from the earth could be anything but special, and so I always made a point to say “Hi.” He always responded. And so did the little black puff-ball of a dog who thumped-thumped his tail in canine greeting.

Every year I look forward to spring when he tills the soil and begins the process of bringing the earth to life again. Every year I look forward to seeing him hunched over the dirt with his little black dog lying dutifully next to him. Only this year — the garden isn’t there anymore. Oh,  well, the rows of dirt are there – empty. The stool he sat on is gone. The little dog, Thumper I got to think of him as, is nowhere to be seen. Instead, there is a hole,  not filled with dirt or seed or plants, but a sort of empty pit inside of me that sorely misses my old man gardener and his little black dog, who once filled my days with the precious joys of simple pleasures,