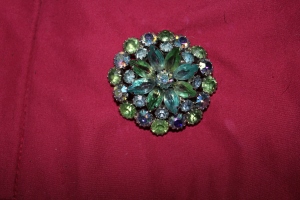 As I was growing up, the most magical thing in my life was my mother’s jewelry box. Sometimes she would invite me into her bedroom and allow me free rein to look at all its treasures. It was full of beautiful pieces my father had given her. But my favorites was the sparkly, gaudy junk jewelry that came from the local drugstore or were hand-me-downs from my grandmother who was known for her glamour including a most fashionable side-ways-perched hat with a turkey feather extending a foot.  During those precious times going through her gems, I begged and cajoled her to give me this or that – all the junk stuff – and often she would relent, but just as often she would say, “Someday it will all be yours,” and I would leave her room with a tear in my eye.

It was Christmas Day and my family and I did what we always did – go to my parents for Christmas gift opening and Christmas feast, prepared by my father who always did all the cooking. That year it was roast beef – my favorite. Mom wasn’t feeling well that day, so after a sip or two of my wine, she took to her bed, dragging her oxygen cord behind her. We all devoured our meal and after, my kids went down to the basement for their annual ping pong tournament and my father and I sat under the twinkle of the Christmas tree finishing our wine.

“Let’s go check on your mother,” he said after a serene and meditative silence.

Together, wine glasses in hand, we entered the bedroom. The air was different. Like there wasn’t any. My mother’s oxygen thing had slipped out of her nose and her head was cocked off to the side. But most truly miraculous was the look on her face! After the pain and darkness that trapped her features earlier in the evening, now her face was bright and shining and a peaceful smile told us what her ending had been like.

After a whirlwind of 911 calls, and a houseful of police, ambulance EMS workers and firefighters, my mother’s body was taken to the hospital where she was officially pronounced dead. We went into the bare sterile room where they had put her body to say our goodbyes and were struck by how much different she looked. The beautiful peaceful face was gone and in its place was one dominated by a grimace and haunted look. We later learned that in their efforts to revive a person, EMS workers end up distorting the appearance as it was when the person’s soul left the body.

The day after my mother died, December 26th, my father appeared at my door and in his arms was my mother’s very hefty jewelry box. When I opened the door he reached out and handed me the box.

“She wanted you to have this,” he said, tears streaming down his face. He turned away and left. I cried , but I wasn’t really sure exactly why. Was it for  my father driving away, alone? My mother’s death? Or all the memories that were encapsulated within the box in my arms—memories of time with my mother as I begged and cajoled her to give me something of  the gold, the silver, the diamonds and other precious gems. But the things I valued most, and still do, are the things she also loved: the glittery, schmaltzy pieces of costume jewelry.