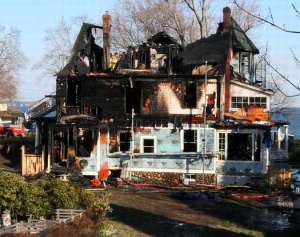 Madonna Badger’s horrific Christmas Day fire is back in the news as the contractor’s insurance company does not want to pay out for claims or lawsuits due to his company’s role in the fire. Whatever on that one, but let it be said, I am not a fan of insurance companies.

But this post is not about the insurance company. It’s about Madonna, because once again, as the fire raises its ugly head, the gun-slingers and crucifiers are out in full force, tossing about their self-aggrandizing rhetoric. Here are a few examples from The New York Post:

“If Madonna Badger or Michael Borcina had any decency in them, they would both do the right thing and commit suicide. Their greed and stupidity caused this horror, killing young kids and old people. Yet, the two of them continue to walk the earth, pretending that they are actually civilized humans.”

This one is about Madonna’s contractor-friend:

“BOYFRIEND AND MOTHER SHOULD BOTH BE IN JAIL….”

“This guy is at best shady and criminally negligent and at worst, the most vile murderer of 3 children… that the MOTHER is sticking by this guy tells me all I need to know re where the priorities of these two were and what led up to the horrific events of that night… horrific umtimely death of yet more angels…”

“The story stinks to high heaven. I think the contractor and the wife deliberately set the fire, just didn’t expect to kill anyone. Obviously this contractor has friends in the town, thus the bulldozing of the house and destruction of the evidence within a day of the fire. No one in their right mind would take hot embers from a fire and leave them in a paper bag – in the house. The State of Connecticut needs to appoint an investigator.”

Many more comments adorn the pages of yesterday’s Post, and to be fair, many of them are in supportive.  As for the critical ones, I am not religious, but I always hold true to the story of the woman who was caught committing adultery and Jesus then said  “let he who is without sin, cast the first stone.”

Why does this story haunt me so? I’ve asked myself that a hundred times, and I am pretty sure the answer lies in that I was also a single mother bringing up young children, a single mother who dated, who tried to balance work, home, child care and nurturing, and tons of other things. I made mistakes. I made one major mistake:  I married a man who did the unthinkable, and that I will have to take with me to my dying day. I suffer with the agony of that, but I can’t even imagine Madonna, how she copes, how she lives, how she breathes.